Fablab a project of Ashton Community Trust has been very busy engaging with many outside organisations over the past few months. 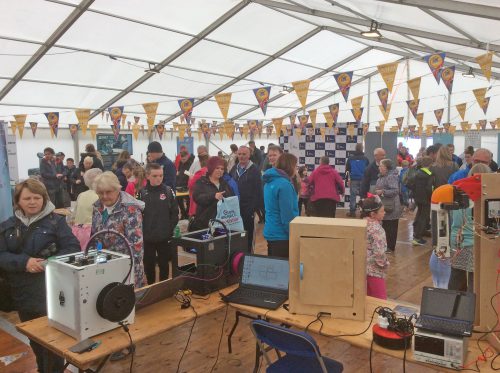 Youth Forum
Our Monday night sessions have started back with the young people of the Girdwood Youth Forum. Before the summer break the Fablab team , with the young people designed two logos that would represent the forum group and the youth space in Girdwood. There were some very creative ideas generated and after many discussions a new design was made. Keep a Lookout over the coming weeks to see the logo on the groups new T—shirts and hoodies. A great way to get young people to feel invested in their group.
Men’s Shed
Over the past months Fablab Belfast have been working closely with North Belfast Mens Shed. The Shed men have bought themselves a new laser cutter and the Fablab team have a had a very enjoyable time teaching the guys how to design for and operate their laser cutter. The wealth of knowledge in the Mens shed is incredible and it is wonderful to see the men take their background skills and apply them to new technologies. Keep an eye out over the coming months to see their craft work on sale. A perfect blend of old and new helping the community!

Workshops
FabLab have been running a series of workshops based around the machines in the lab. We started the series with an introduction to Laser Cutting which was fully booked and went in depth into not just the design of artefacts but the fabrication too and was enjoyed by everyone who attended. This was quickly followed up by an introduction to Vinyl cutting, the use of a plotter to cut vinyl into designs, shapes and lettering. The next in the series is a 3D printing and solid modelling workshop focusing on the fundamentals of 3d design for printing. Keep a lookout on our social media and website for the next up and coming workshops.

Air Show
Fablab packed up and took the lab to the Portrush Air Show. As part of the S.T.E.M village we were beside Thales, Queens University, Ulster University to name but a few. The laser cutter was fully operational allowing anyone who stopped by to have a go at making their own plane shaped key rings as well as being able to watch as the 3D printer made different aeronautical artifacts! There was also opportunity to play rock paper, scissors with a robot and our very own arcade machine was running non-stop. The event was fully enjoyable and was a big success as the planes and helicopters flew above. We hope everyone else enjoyed it as much as the team did!

Ploughing Championships
Fablab Belfast are travelling again, as one of the leading partners of Fab Foundation Ireland, we will be travelling to County Offaly to the Irish Ploughing championships. This event in conjunction with Science Foundation Ireland will exhibit to over 10,000 participants and will showcase how the world of STEM is used in every field ( excuse the pun). This is sure to be an enjoyable and informative event that will bring together 3 of the 7 Fablabs in Ireland as the Fablab exhibitors.
As always, if you are interested in the work of Fablab or simply want to “have a go”, give the team a call on (028) 90 755 142 and arrange an appointment and the fun a friendly staff will be happy to help you explore the world of digital fabrication.