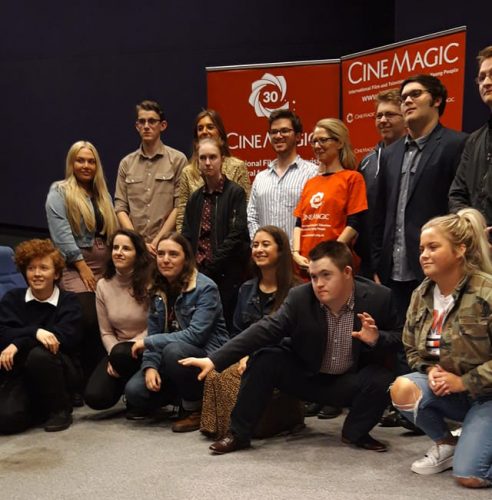 ‘US AND THEM’ a short documentary made by The Breakthrough Project has received a high commendation from judges at Cinemagic International Film Festival.

As the largest film and television festival designed for young people in the UK and Ireland around 40,000 young people (aged 4-25) participate in Cinemagic events in Belfast, Dublin, London, France (Castres), New York and Los Angeles each year.

This year’s event in Belfast saw US AND THEM screened as part of the festival line up on Sunday Nov 3rd at Queens Film Theatre. Filmmakers Caitlin, Cloídhna, Tori and Tia from North Belfast explore their lives as young women in their documentary. The film addresses themes such as societal stigma around teenage pregnancy and explores the challenges of homelessness. While the filmmakers very honestly confront their life’s adversities in the narrative, another important theme for them is also positivity with the words “I love my life” being echoed towards end of the film.

The film charts a journey for each of them and with a high commendation from Cinemagic it looks like their journey is not quite over.

Check out the film on our facebook page; @breakthroughbelfast

Breakthrough is a personal development programme for young people aged between 14 and 24. It has a range of opportunities including creative skill-based learning such as film.